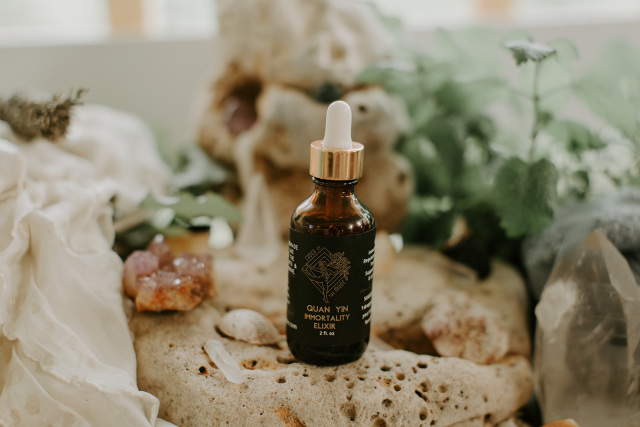 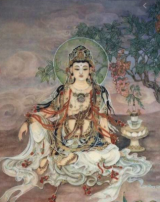 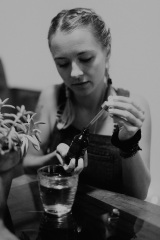 Our double-extracted reishi mushroom tincture, combined with oils of spicy cinnamon bark and warming nutmeg, bring you an elixir for a spiritual & physical sense of immortality.

Newly upgraded recipe! This medicine is extracted with hand-distilled brandy from bananas on the island of Maui. The yeast to make the brandy is from the Kukui Tree Flower, a sacred tree meaning "Light" or "Torch" in Hawaiian due to the tree's nuts being so high in oil they are used in providing fire, light and warmth to the culture since ancient times.

Polypores present in Reishi not only help develop an unknockable immunity, they also politely asks toxins and free-radicals to leave the premises, allowing you to feel fully yourself rather than weighed down with outside intruders.

Call upon the plant spirit of Reishi and the inner-archetype of Quan Yin to build your strength, compassion and immortal nature.

MORE ON THESE PLANTS:

"Today, reishi stands out as one the most valuable of all polypore mushrooms in nature for the benefit of our health. " - Paul Stamets, 2012

Reishi is an ancient Chinese adaptogen mushroom known for its Qi balancing benefits (aka Chi or energy). Research shows its been used for at least 2,000 years and up to 7,000 years in Chinese medicine, is known to build immunity, strengthen the body and mind from fatigue, balance sleep cycles, stop asthma, and optimize organ function, especially the liver's metabolic efficiency.

In Chinese, it's called ling zhi, meaning "spiritual potency," and has also been called the "cosmic messenger" to aid us in protection and manifest power.

In this Immortality Elixir, we also use Cinnamon bark and nutmeg, both known to lower blood pressure, stimulate blood flow, and lower blood sugar levels. These delicious and aromatic spices, combined with the powerful reishi mushroom, give you a refreshing dose of pure heart (cardiovascular support) and a taste of life's vitality.

1-3​ ​droppers per day under your tongue or in your favorite beverage. Studies show that the benefits of reishi are typically felt after 10-14 days and full health benefits in effect after continuous use for two months. Keep enjoying :)

Goddess Quan Yin and Reishi mushroom both share origins from ancient Chinese times and are known for their profoundly immortal qualities. We often see the two depicted together in ancient art, signifying their eternal connection to bridging heaven and earth.

Quan Yin, a Buddhist and Taoist goddess, is known as a bodhisattva whose soul chose to return to Earth again and again until all of humanity is uplifted into their highest consciousness.

When she received her liberation after living a life dedicated to prayer and service, she heard the suffering of the world and turned away from the opportunity of nirvana to tend to the earth's cries. She made a vow to return again and again to Earth in a compassionate effort to lift all of humanity from its suffering.

Her name translates to "one who hears all sound," meaning she hears all prayers. She holds and represents great mercy for all things, and contains the power of spiritual immortality.

Invoke her as you treat yourself to the health benefits of this reishi tincture and feel your own immortality growing.

**** This is a PRE-SALE ORDER as there will be a limited number of these tinctures available. Order yours today to receive by the next New Moon (Jan. 6th 2021)

Sold out
Add to Cart