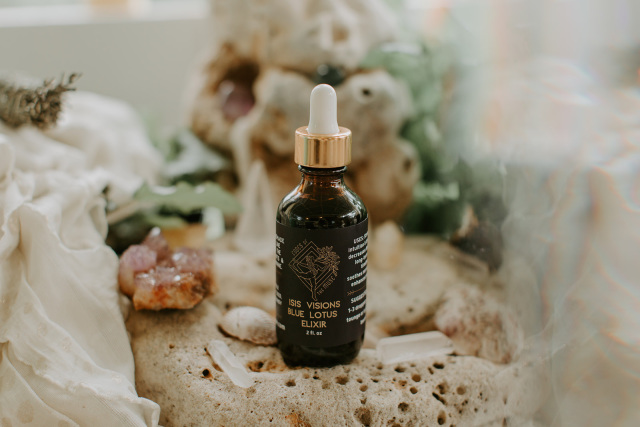 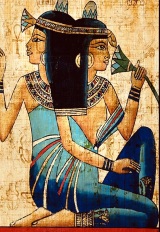 A Codes of the Muse top pick.

Do you want to dream more? Use ancient plants to support intuition, meditation and inner-journeying through the subconscious? Enjoy a tincture that not only tastes anciently amazing but also soothes nervous yoursystem and creates deep relaxation?

If so, Isis Visionary Elixir is right for you. This combination of Blue Lotus, Poppy, Vervain and Saffron have a potent ability to help us see beyond the normal circumstance and aid us in relaxing to tap into the ancient memory coded within.

Our Blue Lotus, hand picked from Sri Lanka, guides us to our own personal truths. An ancient plant of Egypt, the Mediterranean, and later the Far East, Blue Lotus has been used for thousands of years in ceremony and temple ritual.

In Egyptian history, the blue lotus flower, technically a lily, is considered the first specimen to arrive form the "primordial abyss" and thus has incredibly significant power in ancient mystery schools. Not only a symbol found in hieroglyphs and statues, it is believed to have been a powerful entheogen for ceremony in the occult temple rituals.

Blue Lotus contains nuciferan (a natural anti-spasmodic) and aporphine, both naturally occurring compounds which help clear the subtle body and link the right and left hemispheres of the brain, or the analytical and intuitive mind. It's relaxed euphoric effects works as a powerful gateway to higher states of consciousness.

MORE ON THESE PLANTS:

Vervain, a well known and powerful nervine aids in relieving depression and mood swings. It does so by releasing neurotransmitters dopamine and serotonin, aiding in feelings of bliss and relaxation.

Saffron, the world's rarest spice throughout the ages, has be a medicine, aphrodisiac, and ancient ritual offering for almost 4,000 years. Today we know that is boosts the immune system with its powerful antioxidants, increases libido, and balances hormones.

This combination of herbs, dripping with ancient memory, not only relieve dis-ease on the surface but addresses it on the deeper subconscious level. By opening us to a deeper understanding of what led to the depression, anxiety, or other shadow aspect in the first place, we can find long-term solutions for healing. Often with this medicine comes powerful insight into the unintegrated parts of ourselves. This medicine helps us release fear and allow our soul to grow and remember our cosmic continuity.

Isis, high priestess of a feminine lineage of ancient arts in Egypt, was certainly not the first to utilize these plant remedies or offer them in temple ritual. However, she became highly associated with Blue Lotus as a ceremonial plant due to her high popularity and creation of her mystery school cults in Roman times.

We invite you to pray to her or connect with her archetype to increase magic, mystery and cleverness. Mother of Horus, she was a calm house-holding figure, but when battle called, she served as a powerful aid in destroying evil and empowering the feminine aspects of dream and spiritual insight.

1-3 droppers under your tongue or in your favorite beverage when in need of calming energy for meditation or prayer; best before bed for lucid dream use; or to help direct intuitive guidance and answer questions.

Sold out
Add to Cart