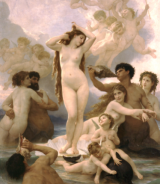 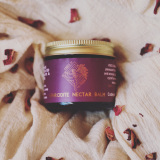 SKU:
$55.00
55 88 $55.00 - $88.00
Unavailable
per item
Aphrodite's Nectar Balm is a gift from the goddess herself. Our tasty Nectar Balm gives edible lubrication for increased sensitivity for arousal with self or other(s). Imbued with love from our Cali sun-grown c . b . d. , you will feel the subtleties of touch and connection, while receiving the benefits of this powerful plant inside and around your most sacred parts.


Made in a yummy base of cacao butter, shea and coconut oil, infused with loads of aphrodisiac plants, pelvis relaxing allies and and virility increasing herbs. Sweetened with stevia for extra tasty and aromas of rose, nutmeg and vanilla oil, it is not only delicious, it's your best friend in bed.


Ever have trouble with self-pleasure? Needing a little more play time before the action with a partner? Then Nectar Balm is here to serve you. For women, Nectar Balm creates a softening effect on the body allowing open passageways and more connection. It's wonderful on the nipples, lips, and safe to use internally so that plants allies can help you relax and receive.


This medicine also supports an easeful Moon Cycle with hormone balancing, cramp relief & bloating reduction herbs. We recommend putting it inside the cervix during menstruation. One way to do so is by coating Moon Cup with the balm so that the oils and herbs can rest and absorb into the cervix and bring relief to the entire uterus.


It's an all over feel good balm no matter the saucy occasion or moon time ceremony.


Aphrodite, popularly known as Greek goddess of love and sexuality (and also known as Venus in Roman mythology), symbolizes power through sensuality and freedom in expression of love.
In Homer it says, "she [Aprhrodite] was the goddess of love, who excited this passion in the hearts of gods and men, and by this power ruled over all the living creation. (Hom. Hymn. in Ven. ; Lucret. 15, &c.)


There are also many tales in the Greek epics and other ancient mythological stories which tell of Aphrodite punishing those who neglected her or despised her power. Oppositely, there are equally as many stories in which she protects and empowers those who pay homage to her. If we look at Aphrodite as a symbol or archetype that represents a devotion to love, we are reminded of the gifts of honoring this love or the repercussions of dishonoring it. Through the use of this medicine, we hope that you find the truth of the power of sexuality and the sacred vessel with its boundaries and with its gifts.


Lastly, we would like to point out that Aphrodite's origins are beyond time and space. While greatly attributed to early Greek origin, history demonstrates that Aphrodite is quiet similar to Phoenician goddess Astarte, called by the Hebrews Ashtoreth, and her connection with Adonis points to origins from Assyrian culture (aka tribes from modern-day Syria.) "The 5th-century BCE Greek historian Herodotus states that the most ancient cult site to Aphrodite was at Ascalon in Syria." This lineage of the goddess speaks to the timelessness of her evolution and as she was worshipped in many forms across borders and cultures we are reminded of the ancient importance of honoring the feminine and her powerful of love.
Add to Cart